John Dewey  was a strong proponent of a democratic classroom and the importance of free-flowing knowledge. I think for the first time I really understand what he meant by this quote:  “The communication which ensures participation in a common understanding is one which secures similar emotional and intellectual dispositions–like ways of responding to expectations and requirements.” Democracy and Education, 1916; MW 9:7

So, here’s how I stumbled into a democratic classroom.  I was discussing the Declaration of Independence with my 5th grade students, and as hard as I might, I was unsuccessfully trying to get them to understand how truly revolutionary the idea that governments derive “…their just powers from the consent of the governed.” It changed everything!  I knew by the looks in the students’ eyes, that I did not have them convinced. And that’s when I stumbled into the democratic classroom. I said, OK, lets use an analogy you will understand.

I first emphasized that they had no choice in selecting their history teacher. I did not need their consent to teach them. But what if we gave the students the power to choose their teacher?  I first asked them to read quietly the balance of the chapter in their Joy Hakim, A History of US book. I emphasized that any one of them may be selected to be the teacher for this chapter, and they needed to read with comprehension and take notes. Then I allowed them to discuss and figure out how they were going to make the teacher selection. I made sure not to say anything during the process, other than to give them a reasonable time to make the selection. It was interesting to see how each of the three classes used different selection processes. Once the votes were counted and the student teacher was selected, then the newly elected teacher began his or her lesson.  Again, I made no attempt to participate or guide the lesson or discussion that followed.  And it was here when I just dropped my jaw in amazement.

Yes, the student teachers did a great job, some using discussion facilitation techniques 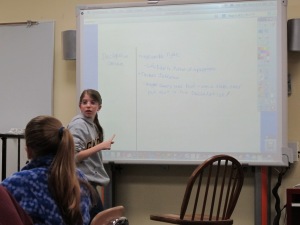 One of my 5th graders facilitating a discussion.

that have taken me eight years to master.  However, the magic of the democratic classroom was revealed during the discussion among the students. The discussion was in depth, organized, and everyone was contributing.  Everyone began expressing their opinions, supported by what they read, and they stopped fixating on what is a “right” answer. They listened to each other, and supported an idea with different examples, or respectfully took a different opinion. We have always had good discussions in my class, but this was the best discussion I have heard. Ever.  I asked myself, what was happening?  And here is what I concluded:

1.  I took the KING, (me – the authority teacher), out of the mix. I removed myself from the discussion and the front of the room, and allowed them to select their own teacher. By doing that, the students found “similar emotional and intellectual dispositions–like ways of responding to expectations and requirements.” I removed the KING’s expectations, and the students were free to think their thoughts, not what Mr. Emmons was looking for.

2. Since each of the students was hyper-motivated to read carefully and take good notes, the discussion remained relevant and well paced.

This went so well, I have decided to use this method at least once per week. Also, since all of the students now want to be teachers in the class, they are all preparing diligently for each history session.

Teachers should derive their just powers from their students.  I think our founding fathers had it right.

1 thought on “Stumbling into a democratic classroom….”